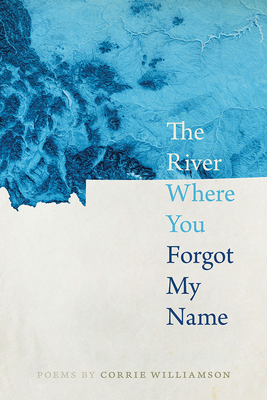 By Corrie Williamson
This title is not available.

The River Where You Forgot My Name travels between early 1800s Virginia and Missouri and present-day western Montana, a place where “bats sail the river of dark.” In their crosscutting, the poems in this collection reflect on American progress; technology, exploration, and environment; and the ever-changing landscape at the intersection of wilderness and civilization.

Three of the book’s five sections follow poet Corrie Williamson’s experiences while living for five years in western Montana. The remaining sections are persona poems written in the voice of Julia Hancock Clark, wife of William Clark, who she married soon after he returned from his western expedition with Meriwether Lewis. Julia lived with Clark in the then-frontier town of St. Louis until her early death in 1820. She offers a foil for the poet’s first-person Montana narrative and enriches the historical perspective of the poetry, providing a female voice to counterbalance the often male-centered discovery and frontier narrative.

The collection shines with all-too human moments of levity, tragedy, and beauty such as when Clark names a river Judith after his future wife, not knowing that everyone calls her Julia, or when the poet on a hike to Goldbug Hot Springs imagines a mercury-poisoned Lewis waking “with the dawn between his teeth.”  Williamson turns a curious and critical eye on the motives and impact of expansionism, unpacking some of the darker ramifications of American hunger for land and resources. These poems combine breathtaking natural beauty with backbreaking human labor, all in the search for something that approaches grace.

Corrie Williamson is a poet and teacher in Montana. Her first book, Sweet Husk, won the 2014 Perugia Press Prize. She has been nominated twice for the anthology Best New Poets and received the James Boatwright III Prize for Poetry from the journal Shenandoah. Her poems have appeared in TriQuarterly, West Branch, AGNI, and the Missouri Review, among others.

“What do thousands of snow geese perishing in the toxic waters of the Berkeley Pit have to do with Julia Hancock Clark teaching her son piano at the edge of the wilderness? They have been routed through the vision, imagination, and verbal ingenuity of Corrie Williamson, wherein they became her remarkable art, this brilliant book of poems.”—Robert Wrigley, author of Box

“There is something private in these carefully wrought poems, not confession but intimacy. We sit within a small circle of light and listen to Williamson’s unhurried voice as it tells us, 'Hush now, all / will be revealed'” Which is how we must dwell on this earth, too—with patience and a sense of time’s great arc and return. I’m grateful for the echoing music made in the space between present and past.”—Keetje Kuipers, author of All Its Charms

“We have to imagine we belong to a place. We must also live knowing we are bound to our human history, as complex, beautiful, and tragic as it may be. Girded with such knowledge, we live with greater purpose and may begin to imagine our future that we may work to preserve it. These are a few of the larger notions this fine book prompts, but the broad strokes are stippled with the intimacy of natural detail and the human passion that springs from it. The result is a rich and absorbing book of poetry.”—Maurice Manning, author of One Man's Dark

“‘For what stirrings / am I attuned?’ asks Corrie Williamson in this potent, questing second collection. Here, in these sound-rich poems, Williamson shows us just how wild the world still is, despite the losses. How weird. How beautifully unknown. From bacteria that is ‘forging of waste its version of spring’ in the tailing pits of old mines to the glories of the come-along, that most miraculous of tools which lets us heft impossible weights—somewhat like a poem in Williamson’s skilled hands."—Elizabeth Bradfield, author of Toward Antarctica