Some of My Best Friends: Essays on Lip Service (Hardcover) 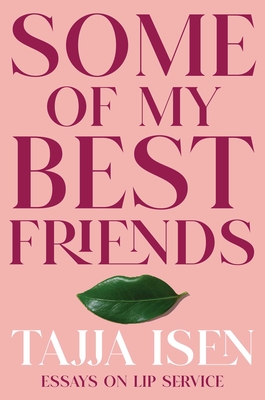 Named One of the Best Books of the Year by The Globe and Mail (Toronto), Daily Hive, and Electric Literature

A fearless and darkly comic essay collection about race, justice, and the limits of good intentions.

In this stunning debut collection, Catapult editor-in-chief and award-winning voice actor Tajja Isen explores the absurdity of living in a world that has grown fluent in the language of social justice but doesn’t always follow through.

These nine daring essays explore the sometimes troubling and often awkward nature of that discord. Some of My Best Friends takes on the cartoon industry’s pivot away from colorblind casting, the pursuit of diverse representation in the literary world, the law’s refusal to see inequality, and the cozy fictions of nationalism. Isen deftly examines the quick, cosmetic fixes society makes to address systemic problems, and reveals the unexpected ways they can misfire.

Tajja Isen is a writer, editor, and voice actor. Her essays and criticism have appeared in dozens of outlets across the US and Canada. She is the editor-in-chief for Catapult magazine, the former digital editor for The Walrus, and has also edited for Electric Literature. She is the coeditor of the essay anthology The World As We Knew It: Dispatches from a Changing Climate. A voice actor for over two decades, Tajja can be heard on such animated shows as Atomic Betty, The Berenstain Bears, Super Why!, Go Dog Go, Jane and the Dragon, and many others. You can follow her on Twitter @TajjaIsen.

“Funny, poignant and super-smart in all the ways.” —Ms. Magazine

“Tajja Isen [is] a multihyphenate talent...with a delicious knack for wordplay and language... Isen’s original perspective and clever language that will win over readers.” —BookPage

“Brilliant .... [Isen] examines racism through multiple lenses with the dexterity of a compound microscope.”—Anomaly

“[A] stellar debut collection...Some of My Best Friends shows a bracing willingness to tackle sensitive issues that others often sweep under a rug.”
—Kirkus Reviews (starred review)

"Isen scrutinizes society’s attempts to bandage over such issues as race and gender inequality in her powerful debut. Isen’s voice is both wry and sensitive as she fearlessly lays out the limits of talk in solving inequality; fans of sharp cultural criticism, take note."
—Publishers Weekly

“Beautifully written, wildly funny, and whip smart, the essays in Some of My Best Friends are among the best I've ever read. Tajja Isen is unafraid to ask deep questions and embrace their messy answers. She's one hell of a writer.”
—Kristen Arnett, New York Times bestselling author of Mostly Dead Things and With Teeth

“Isen understands that our shared future demands we expose and call out wasted time, hollow gestures, and empty words. Some of My Best Friends is an inspiring, determined work of personal narrative and cultural criticism.”
—Saeed Jones, author of How We Fight for Our Lives

“The essays in this book dazzle stylistically, thrill intellectually and flip the finger to the many ways North America pretends to talk about racial experiences. Isen is a provocateur of the first order. Her wit and wisdom capture the current moment and soar above it.”
—Kamal Al-Solaylee, author of Return and Brown

“Sure-footed and illuminating, Some of My Best Friends brilliantly lays bare the lies that accompany some of the most insidious aspects of racism— lip service, pandering, and plausible deniability—and offers a bracing inoculation.”
—Jess Zimmerman, author of Women and Other Monsters